Can music help you learn a new language? 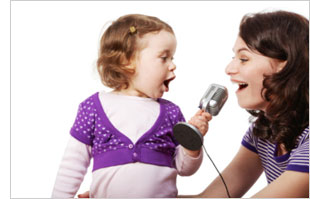 Many cultures have their own songs that they sing to their little ones. These songs teach them how to count, to recognize their alphabet, and learn words. If you want to learn a new language and you have to start with the basics then their songs are a good start. Whether you want to learn French, Spanish, German, English, or another language you'll be able to find kids songs that can help you.

Let's say you want to learn Spanish then you can start with a Mexican Counting Song. The lyrics go like this,

The english translation is:

A very short and simple song and we already have several counting words, not to mention animal words and more.

One of the key things you need to do when learning a new language is to build your vocabulary. You have to start with basic words before you can move on to sentences and grammar. Songs are a really effective tool to help increase vocabulary. Just take a look at your children and how many words they learn from songs.

Songs are not just helpful in learning additional vocabulary. They are also very helpful in teaching correct pronunciation. The more you listen to another language the more you become familiar with the way they say things. Developing a strong listening skill can help immensely in learning a language. The better your listening skill is the better your brain processes the sounds it hears. You'll also have the chance to mimic the pronunciation and the sounds of the language you are trying to learn.

Repetition and mimicking is another method we use to learn and practice a new language. If you do not say the words you will never learn. With songs in the background we are able to practice saying words out loud. We can also listen to the word again to make sure we are saying it correctly.

Learning about the culture

Aside from just learning to speak a new language, learning about the culture is also important. Many Asian countries have specific words that show respect to different people of different stations. This is not so prevalent in Western countries but it is important to learn. By listening to songs we can pick up a few things about another culture.

If you know kids songs or folk songs from another country it can also become a conversation starter. Many people are delighted to encounter someone who is trying to learn their language. They may tease you a little and laugh at your pronunciation but more often than not they mean well and want to help. You can ask them for help and mention a song that you know in their language. This can lead to a great conversation and a quick and fun, impromptu lesson.

So don't discount children's music when it comes to language learning. Adding them to a lesson can make it easier and fun. Pretty soon you'll be singing along to a new song in a new language.